Food- and reading-wise, I've been enjoying a time-warp. Andy's bedside table yielded a wonderful paperback,  Among Friends, by M.F.K. Fisher, one of the best food writers to have spiced up our world. This, her autobiography (though with a food writer, isn't it all a bit autobiographical?), tells about her family's move to the very Quaker ("Friends") community of Whittier, CA., in the teens of last century. Know that the word "Friends" in the title is ironic. Reading about harvesting mussels before pollution ... steamed in fresh seaweed on hot coals at their beach shack's cliffs in Laguna Beach ... well, even as a native Californian I was made nostalgic for a past impossible to experience now.

Just before devouring that book, I'd decided to purge our library to make room for my yoga teaching books. Osteo-arthritis in my right hip, probably brought on by too many extreme yoga poses (leg wrapped behind the head, anyone?), has called an end to my yoga teaching practice. Sigh. Did I mention I loved teaching yoga? Happily, Hatha Yoga, the physical practice, is only a fraction of what it means to practice yoga. I will always live by the second verse of the Yoga Sutras, "Yoga is what happens when we stop identifying with the fluctuations of the mind."

Anyways, while going through our books I spotted a forgotten prize: James Beard's Paris Cuisine, published in 1952. In a rather slim, hardbound volume, the authors profile the best of the remaining post-war bistros and restaurants in the City of Light. Each chapter describes the ambiance, owners and clientele of a particular establishment, and shares a few recipes. Comments like, "the wine cellar is still much intact" reveal some of the compromises that might have been made by the French during the Nazi Occupation. Frequently, the bistros near Les Halles, the epic food market dubbed by Emile Zola as the "Belly of Paris" -- long gone -- host butter or cheese vendors enjoying an early morning oyster stew and Pastis.
Between these descriptions, the illustrations and the recipes, Beard's book transports me to another world altogether.
I'm not the world's best collector. And it's not often that I spot a forgotten First Edition on my shelves.

Even though some of my earliest friends were "item queens" who endlessly scouted thrift shops, flea markets, resale shops and the like ... my only collectibles, USA Ware and California Pottery, are still probably worth the same $3.50 I paid for them at a garage sale. Preferring to use and enjoy my few rarities, I often serve food on them -- and yes, they become chipped as they're washed and used and loved.

Thursday, I decided to cook out of the Beard/Watt Paris Cuisine.

After a good long look at the casserole/gratin before it goes in the oven, know that those dabs on top are all pure unsalted butter. There's potatoes and celery root, thinly sliced and layered with Emmentaler Swiss cheese. Then a layer of smoked sausage, and more potatoes, celery root and cheese. We sprinkled some Gruyere on top to add even more cheesy goodness. Andy kept remarking that the $16/pound Swiss cheese had better taste really good. Hello: this is James Beard we're talking about! 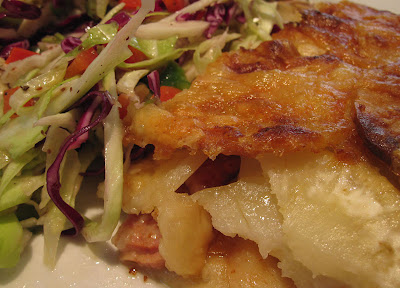 Happy Spring to all, even as I get the last of my Winter Ya Ya's out cooking such a heavy dish. At least there's Uncle Frank's Coleslaw to provide a bit of vegetable counterpart. Yum.
Posted by Tina Rathbone at 2:56 PM No comments: