Normally I'd describe or review books in the right-hand column, like my previous reviews. (Scroll down and look to the right of the page and you'll find my other reviews, in a long column, if you want to read them.) Blogger calls this a "list," however, and it's inconvenient both to write in and to view. So here, in sort of an order, is a blog post covering some of the books I've enjoyed in the past few months.

Kabul Beauty School: An American Woman Goes Behind the Veil, by Deborah Rodriguez and Kristin Ohlson.
At first I feared this would be another story about a Western woman awakening from a fling with a handsome Middle Eastern foreign student, to find herself married, spirited away to over there, and confined to lifelong purdah.

Instead, the witty and determined author tells a true story of heading to Afghanistan on a humanitarian mission ... as a hairdresser. As the mission team goes around the circle introducing themselves as doctors, medics, nurses, administrators and whatnot, Rodriguez is sure the others will heckle her when she reveals her particular skill. Instead, they rush her in gratitude -- anticipating a decent cut or color job without flying to Kuwait or somewhere.

The story gets gritty when she learns more about the culture. Ding! A light goes on, and her true calling there reveals itself. The Afghan women she met, in complete subjugation to husbands or cruel mothers-in-law, suffered a paralyzing life scope. Plus, due to the economy of war, their husbands were often unemployed, and the women, with no skills or autonomy, had no way of bringing in some desperately needed extra income. Rodriguez uses her head (and her client earnings), and opens a beauty school. It turns out that the Afghan culture is big on massive, elaborate weddings -- with the attendant need for massive hair, nails, and makeup.

A true story, sad at times, but ultimately uplifting (and thanks to the narrator's spunky inflection, super fun to audit).


* * *
I never realized the physical strenuousness involved in being a field biologist. The next two books spare neither backaches nor death-defying feats! 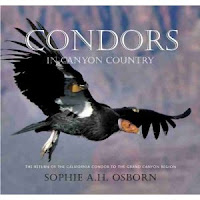 Condors in Canyon Country, by Sophie A. H. Osborn

This beautifully written book describes the joys and sorrows experienced by the field crew working for years to reintroduce the California Condor to the Grand Canyon region.

The magnificent vultures, sporting nine-foot wingspans, have flourished in that region since the Pleistocene era, but modern times have seen their extinction there -- thanks to DDT, lead bullets in their prey, random shooting and/or persecution by hunters and ranchers, and their own tendency to bring garbage and trash up to their nestlings. (You wouldn't believe what some of the x-rays reveal!)

Because Condors are the only species where every one is trapped, numbered, and (most) equipped with a radio device, this book delves deeply into the antics and personalities of each bird as an individual. It's obvious that Osborn, a head biologist there, was deeply passionate about her work -- and the birds. She longs for the day when a condor can fly free, their plentiful numbers ensuring the birds won't have to be wearing numbers.

Much of the biologists' work involves constant monitoring, which sometimes leads to "hazing" the birds. This is where the feats of daring come in. "Hazing," or scaring the condors, is necessary when the birds come too close to humans, when they perch in an area too accessible to coyotes and other predators, and when they must be flushed from their nest so trash can be removed and nestlings assessed for health and progress. At times, this involves all-night hikes into remote areas; primitive camping; and, when needed, scaling the red cliffs and towers to reach a bird or nest site. Whew: It got this acrophobe's skin tingling!

Featured are beautiful, full-color photographs of the stunning Grand Canyon region and the incredible birds. Plus the book is clearly written for the layman, yet with passion and pluck. I loved this book. Andy even read it! (He doesn't get much time for reading non-computer books.) Check it out from your library (don't audit it or you'll miss out on the photographs). 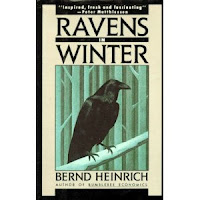 Ravens in Winter, by Bernd Heinrich

Once I got past the introduction, this book seized my imagination and I couldn't put it down. Intrigued after watching the most intelligent bird species interact with its fellows, Heinrich decides to make a study of their habit of food sharing.

Most species don't go and recruit others of their kind to come share a carcass or other food source, but Heinrich suspects that's just what some of these corvids are up to. I won't go into too much more detail -- the back of the book's filled with graphs, charts and such, so he was pretty serious about his research. I won't give away his conclusions, either, except to say that reaching them involved many years of hauling dead sheep and cattle, piles of organs, carcasses -- even roadkill -- up a steep hill in the punishing Vermont winter snows. Oh, and there's freezing in his uninsulated cabin, climbing that mondo-tall pine tree in order to retrieve chicks for marking, and more. Yikes!

A fun read if you already enjoy science-oriented non-fiction. 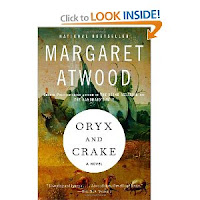 Orxy and Crake, by Margaret Atwood

A harrowing vision of the future, and a compelling love story, this is the best speculative fiction I've read lately.

Actually, I enjoyed the audio book, downloaded gratis from my local library. (Try this!) The narrator is having fun reading this book and goes into character very convincingly. A must-read/hear.