Perhaps collage suits me, for apart from my hippo, the only other Asilomar project I've started and finished is the Shiva vest begun in Rosemary Eichorn's class.
If you've read some of my older posts, you might remember seeing the hippo quilt, Bracelet of Kingdom, started in Susan Carlson's class.

Each year, in several consecutive week-long sessions held at the Asilomar Conference Grounds in Pacific Grove, Empty Spools hosts 60 or so renowned quilting and fiber-arts teachers. Atendees sign up for a class and stay with it for the week, and it's heaven. Three big meals a day await you in Asilomar's huge dining hall, and you walk from your room to class to meals and an evening program along tiny paths carved between tall grasses, windswept cypresses, and wild iris. Deer, woodpeckers and racoons abound. Many attendees take advantage of the boardwalks out in the dunes, enjoying their morning walks out near the rough sea. With your normal routine suspended, you feel you have nothing but a week of creativity and joy ahead.

While gathering my supplies for this class, I decided to create a vest honoring Shiva, a Hindu deity who brought us Hatha yoga. Fabric picturing Shiva is rare to non-existent, so I found some copyright-free images on the Internet and printed them out on fabric using my bubble-jet printer.
As you can see, the main process is to collage elements cut from flowered and other fabrics in a pleasing manner. Here's sort of a creepy/cool story about the back of this vest: I made this vest in 2004. I attended my first yoga teacher training intensive with Tim Miller in 2005. In an expansive mood one day, Tim told us the story of how yoga came to humankind. Shiva was explaining yoga to his wife Paravati by the shores of a lake. A fish swam up and listened to the story. Meanwhile, Paravati had fallen asleep. When Shiva asked her if she was still listening, the fish answered "Yes." He then transformed to a human (some think the human was already inside the fish, like the Jonah story) and went out to bring yoga to ease our suffering. So that's why we have Matsyasana, and other fish poses in yoga today.

But here's the creepy/weird part: When I was putting together this vest, I hadn't heard that story, and didn't know about the fish. I added the fish because I wanted to use the mottled green "swamp pond" fabric that I'd painted in Micky Lawler's class years ago, so I created a lake with a fish in it that Shiva gazes at, and surrounded the lake with my swamp pond fabric.

When I told Tim, and he inspected the vest, his jaw sort of dropped. "You didn't know about the fish?" Do-do-do-do. (Sung to the Twilight Zone tune.)
The vest is reversible; here is Shiva dancing, as the Nataraj.
Posted by Tina Rathbone at 7:39 PM 3 comments:

I think of myself as the Black Hole of Hip. With a couple of notable exceptions, I've always been pretty far behind every trend. Chances are good you can name a current cultural movement or sub-culture and I'll be stumbling upon it, wide-eyed, in the next five years or so. And so it has been with the Craft Beer movement.

Sure, I gave Andy, my spousal unit, a beer-brewing kit fifteen years ago. But that belongs in another blog entry: the Dismal List of Failed Presents post.

In a tiny stab at defining Craft Beer (and I'm already out of my element), I believe that beer crafters -- whether hobbyists or commercial breweries -- take an artisanal approach to beer making. They research styles from far and near, past and present, and concoct mixtures with a wide range of of hops and grain varieties. Most (and notably the Americans) are not afraid to experiment. When I quaffed my first craft-brewed IPA, or India Pale Ale, I found heaven in a glass. Full of green, hoppy flavors, and very refreshing, it was a beer I could hardly wait to tell my friends about. They were kind, to say the least. No one yawned or said, "What else is new?" or "What planet have you been on?"

Roughly two weeks after my first IPA, we met Brett and Suzy, our beer friends. Sure, we have plenty more in common than beer; Suzy does yoga with me, we sew together, hope to paint together, and Brett and Suzy are incredibly knowledgeable about food. 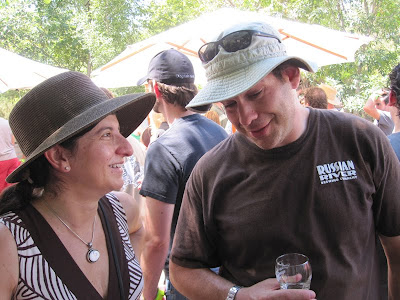 Suzy and Brett enjoy the Stone Sour Beer Fest
When Andy's not writing computer books, he delves into what I can only call Extreme Cooking. (You can visit his blog: http://andyrathbone.posterous.com. Vegetarians, be forewarned. Perhaps even non-vegetarians should be forewarned.) Well, whenever Brett and Andy get together, they fire off tips about rare and exotic fruits, sausage making, and anything to do with time-consuming, delicious cookery. And pork.

With me, Brett's claim to fame is that he brews his own beer. And, he's a certified beer judge. So imagine the patience he mustered when, not even a year ago, I raved about my first IPA. A few months after that, they invited us to a beer festival, part of San Diego's Beer Week, held at the opulent Qualcomm, Inc. There, you could taste a slice of hand-raised pork that was nourished on the spent hops that had gone into the beer they served with it. Here was a sub-culture that had been going on for years ... that I knew nothing about! Beer Week was an eye-opener, to be sure.

When Brett and Suzy invited us to the Fourth Annual Sour Beer festival up at Stone Brewing Co., we didn't hesitate. The event was nicely spread out over the lush, one-acre beer garden; well-spaced beer stations poured tastes of various drafts or bottles. Located in sweltering Escondido, Stone made sure to provide plenty of chilled water stations so patrons could beat the heat and pace themselves. The event ran from 10 a.m. to 5 p.m., but rumor had it that attendees had started lining up at the entrance as early as 8 a.m. Speaking of lines, everyone waiting for their next pour seemed so nice. Often people would offer a taste of their glass; I gave a few tastes myself. Casually dressed and extremely knowledgeable, the crowd was there to have a nice, mellow time. 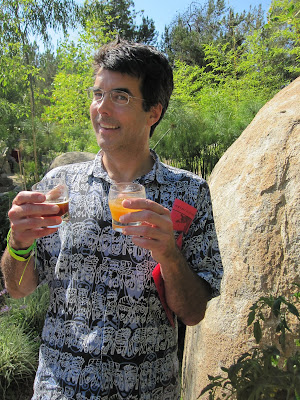 Andy enjoys Sour Beers at lovely Stone Brewing Co.
Overall, I found I enjoyed the more intermediate-level sour beers, but didn't care for the super-sours styles like Gueuze (think, aspirin held in the mouth too long); or the super-fruitys like the Raspberry Lambic that tasted like flat pop.

I'm sure the Beer World is waiting with baited (beer?) breath for my favorites: I liked the Bockor Cuvee des Jacobins Rouge; the Deschutes Bender Weiss; the Grand Teton Sourgrass; the Rodenbach Grand Cru; the New Belgium Tart Lychee and their La Folie; -- and then I stopped writing them down. A $40 admission ticket bought 15 tastes; about a quarter-pint each. Many of these brews will be hard to find; you won't come across them at the local Von's.
Quite a few of the taps had run dry by the time we arrived at 1:30 p.m., including everything from The Lost Abbey, a local brewery. Here's a factoid for you: San Diego County holds the distinction for being the USA's center of the Craft Beer movement. That's about right for me: a trend I never suspected, and right in my own back yard.
Posted by Tina Rathbone at 5:32 PM 4 comments: