I've always maintained that there's nothing like a deadline to set a fire under one's butt. You know, the way your house or garden never looks as nice as right before your party?


For me, that deadline came due when Beth, our new executive director at the Quilt Visions Gallery, called to say they needed a photo of the quilt I entered in our upcoming show. The hippo quilt I'd started in Susan Carlson's class two years ago was almost finished, but still bereft of a binding and a hanging sleeve. 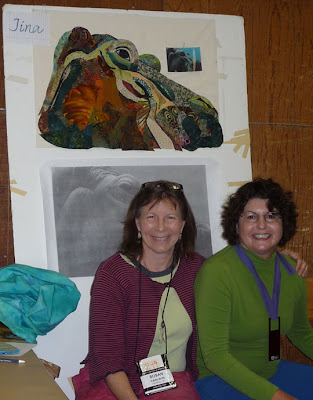 Susan, Hippo and Me, Asilomar 2009
Well, finished at last, I'm proud to announce the birth of Mama Hippo, inspired from a photo I took of her underwater at the San Diego Zoo's most excellent hippo exhibit in the Lost Forest. 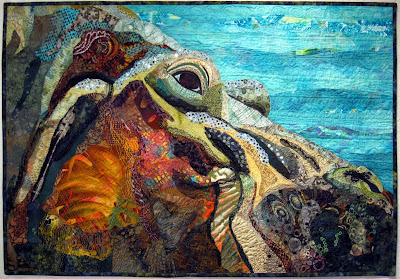 A note about the critique group and how useful it was in the making of my quilt: I asked the group if I should include a spark of white on her pupil, as most animal and human eyes viewed in daylight have a highlight there. They agreed that would look nice, and David stuck a bit of sticky note on her eye as a visual.

I eventually decided against it, since my photo was taken underwater, where her eye has a membrane over it and there is no spark of light to speak of on the photo or on her. But it was great to be able to bounce ideas such as that one off the rest of the group. As an aside, that's why her face is all squeezed in and compressed: she's not breathing underwater.
Posted by Tina Rathbone at 3:58 PM 1 comment: