A Gillian Moss Quilt Added to Our Collection I'd just met Gillian Moss for the first time an hour before, and now I was asking her to sell me her quilt. She showed it at our critique group that meets in the Quilt Visions art quilt gallery. (She's the group leader, but had missed the meeting that I first attended.) It was love at first sight. Simply put, the quilt made me happy. It was edgy, yet so cheerful; such a loose, free-spirited thing.

Gillian politely demurred about selling it, and rightly so! After all, the quilt wasn't even finished, and she wanted to display it in a show later on down the road. Of course I agreed, feeling that I'd been rather bold, and a bit embarrased about that, too. It's just not like me to be so brash. (Of course, all my dear friends and family members reading this will probably snort out loud: "Yeah, right.") Either way, I emailed her telling her so, but much to my happiness, she emailed back that she was willing to sell me her quilt! 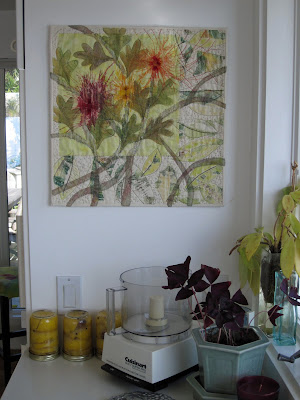 For years, a blue teapot painting occupied this space: a wonderful work indeed, by our own San Diego artist Dorothy Annette. Yet it had been up for as long as we've lived here, over ten years, and we've always talked about wanting to rotate our art collection.

Quilt collectors, Gillian Moss is someone to look out for. For the Rathbone family, her quilt makes a cheerful and happy enhancement to the room where we spend the most time: our kitchen.

Bottom, closeup (Click the photo to see it enlarged): Her quilt is absolutely square; my photo isn't! :) 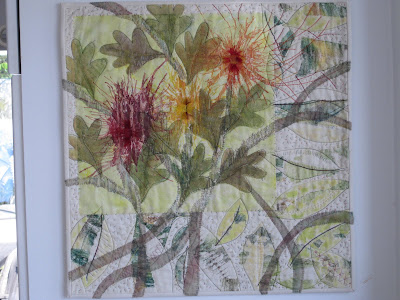 Am I a Hoarder?

One of my close relatives, who shall remain nameless but whose name rhymes with "Shandy," called me a "hoarder" the other day.

True, I had hauled home yet another bookshelf the day before, donated by my friend Jack who's soon moving away (sigh ...) to Montana. But, I argued, I was clearing out our shed, emptying three or four moving boxes of our art supplies, and putting them where we could access them and USE them. To no avail. Even I had to admit, when looking around my over-stuffed studio, that I'd saved every sewing pattern I'd ever bought, and that anyone else had ever bought and given away to a thrift shop or yard sale, too. It was partially "Shandy's" fault, I pondered. After all, his mother had just given me the most delightful gift: an entire box of mid-Sixties to early-Seventies clothing patterns. A treasure, every one! Who could resist?

I continued to survey the scene of the crime. Quilting cottons, although neatly hoarded stored in bins, filled an entire studio wall plus the whole area under two 8' by 4' Cost-co tables. 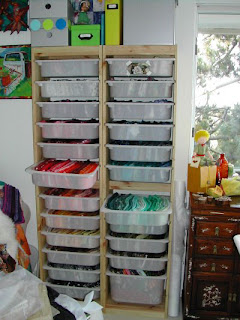 The room's closet revealed an entire wall of shelves devoted to thread. On the other side of the closet hulked two large dressers, underutilized, but with piles of my garment fabric on top, stretching up to the uppermost closet shelf. 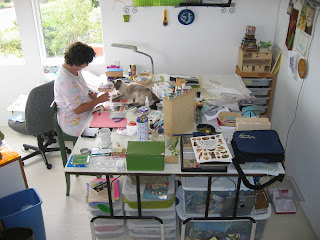 My paper arts collection ... stamps, inks, dies, papers ... was growing with each weekly coupon from JoAnne or Michaels. Formerly stacked atop an Ikea shelf/bin of unfinished fiber objects (UFOs), the nicely arranged Ikea storage boxes were now arrayed atop my two tables (see above), newly displaced by the new art-supplies shelf.

Being a "hoarder" is a relatively new concept. Formerly, I had heard the term in reference to people who rescue many more animals (and keep them) than they can care for in tip-top fashion. Then, one of my quilting friends said she couldn't have our quilt group over because she was a "hoarder," diagnosed with a psychological condition that fills up one's house.


I decided to try and redeem my reputation with "Shandy" by heading to our storage shed and getting rid of any unnecessaries. Hmmm. My eye fell on four big boxes packed with every issue, from day one, of Quilter's Newsletter magazine, given to me by a fellow quilter (when no one else in our group, wisely, would take them). History in the making! The entire collection, a treasure!
Any takers?
Posted by Tina Rathbone at 1:14 PM 2 comments: