When Life Gives You Lemons ... 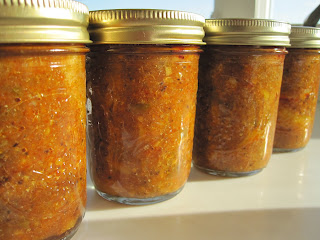 When the lemons started falling off by themselves, we knew it was time to harvest the bounty from our patio's Dwarf Meyer lemon tree. Mom's tree was equally laden, so we decided to team up and can a few jars of our favorite lemon relish, the Hot Lemon Pickle (Elumichai Urugai), from "Dakshin: Vegetarian Cuisine from South India."

Redolent of chilies, fenugreek, ginger, mustard seeds and sesame oil, this pickle perks up Indian food and just about anything else this side of dessert.

I actually can it, processing for 10 minutes in a boiling water bath. If you're lucky enough to get a jar from me, be sure to store it in the fridge once it's opened.

We still had dozens of lemons, and we'd been curious about preserving lemons in salt and lemon juice, Maghreb style. We found a great recipe in Paula Wolfert's iconic "Couscous and other Good Food from Morocco." 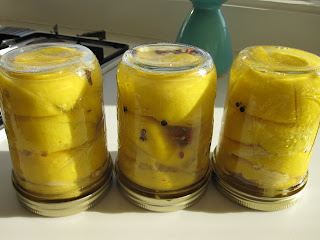 Written back in 1973, this book helped to revolutionize the way Americans thought about cooking and eating. It's still in print today, although I think Wolfert is revising it for a 2nd. edition.
This recipe went against all my beliefs about preserving foods: you don't boil the jars after filling them AND you leave the jars on the kitchen counter for a month or so, turning them upside-down every morning. ACK!
Here's a link to a web how-to on just what to do with your preserved lemons once they're done. Some delicious ideas! More about Moroccan Preserved Lemons
Posted by Tina Rathbone at 12:39 PM 2 comments:

For my next pillow, I wanted a nice, big one. Stumbling upon some nice Merrimekko fabric, vastly reduced at the Crate & Barrel outlet store in Carlsbad, I decided to do a mid-century modern treatment, left, with linear quilting and some fused organza napkin fabric in little, very fiddly circles. The fabric was rather thin, being a cotton sateen. Of course it needed some quilting to strengthen the pillow. This was actually a pain in the pincushion. 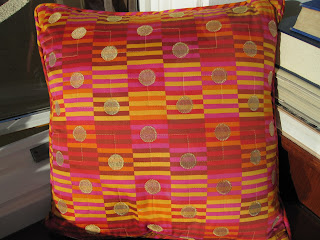 Bottom: I went wild with curly free-motion quilting, hand-embroidered chain-stitch, and more of those fused, fiddly circles. I call the piece "Two Sides to Every Story." 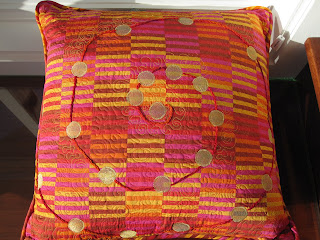 Posted by Tina Rathbone at 10:59 PM No comments: 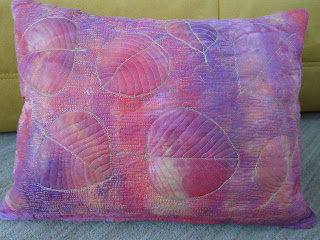 A few months ago, I decided to contribute as an act of service (seva) to pass on the art of sewing to younger women of my acquaintance. After teaching yoga, or at other gatherings, I offered free lessons. As my new students arrived with armloads of clothing, with alterations in mind, I proceeded to walk them through some ... alterations. Hmm; that wasn't quite what I had in mind, but ... to be more yogic about it, I should not have been harboring expectations or attachments about the experience in the first place.

For a future project to teach everyone to actually sew something from scratch, I hit upon the novel idea of a ... drumroll please ... pillow cover. Banal, perhaps, but simple, and hopefully something one could finish in one session and regard with some sense of satisfaction. So I decided to make a couple on my own; first, to practice up, and to give myself a place to practice free-motion machine quilting -- always needed.

I took a hand-painted, sun-printed bit of yardage from a Micky Lawler class, and worked some free-motion machine embellishment in gold metallic (Madeira FS). Then I filled in the background with my trusty rayon thread (Maderia No. 40).

You machine quilters will note that the filling stitches on one side are more successful (bottom photo) than on the other side (top photo). By the second side, after many bobbin thread experiments, I remembered that the top thread was polyester, not rayon (Superior's  Rainbows variegated line), so I switched the bobbin thread to a very thin poly called "The Bottom Line," by Superior. Perfecto! 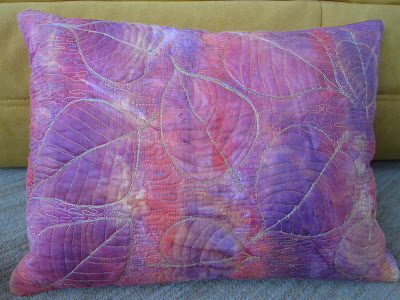 -- After realizing what bobbin thread to use ...

Today, after the end of my early a.m. yoga class, I asked the group if they'd been enjoying the springtime birds lately. No sooner did I arrive home and start eating lunch when ear-splitting screeches reached the table. Chevy, our shy kitty, was outside, so I was a bit worried whether he'd be frightened at the prospect of about 20 wild green parrots making such a racket. It seemed at first as if they were fighting -- but wait... they had all paired off and appeared to be mating, in surprisingly close branches of the huge eucalyptus grove to our north.

Loud always, today's shrieks were different: much more frantic sounding. Maybe they were stimulating each other to mate, a reason for the lack of privacy. Hmmm.

Often, one parrot hung from the beak, and then the talons, of the other, both heads downward towards the ground, trying to bring critical body parts together while smooching (biting?) beaks and breasts. Often a branch prevented contact between the critical body parts, causing much awkward scrambling in the operation. Or, a third parrot would fly down, creep near and bite the toes of the paramour, causing either one or both of the pair to lose grip and plunge to another branch. (This last development I noticed only after grabbing the binoculars, feeling a bit voyeuristic in doing so.)

Soon things had quieted down, and the tree transformed from a feathered fantasia to a perch for grooming. Andy claimed the mates were having a cigarette.

From AvianWeb: The Red-crowned Parrot - also known as Mexican Red Head Amazon or Green-cheeked Amazon (Amazona viridigenalis) - is an endangered Amazon parrot native to the lowlands of North-eastern Mexico to Northern Veracruz.

Apparently they mate for life; Andy suggested we "leave the windows dirty" so we can watch them without scaring them away. Sounds good to me!


The Encinitas Public Library, in San Diego's North County, recently opened a fascinating and timely Recycled Art show. It runs through June 6. You can expect every medium from wood and found object assemblages through bottle art through textiles. I especially loved an haute couture, hand-dyed and beautifully tailored women's coat, made from an old sheet.

The opening reception was deliciously catered, but decidedly un-green, as it offered water in those irksome tiny plastic bottles. In fact, a troupe of performance artists covered in such trash ominously shook their bottles at everyone -- making it hard to talk to fellow art lovers.

Look for art by two of my friends, Ariane Brittany and Irv Simpson. Plus, the library building itself is a work of art. 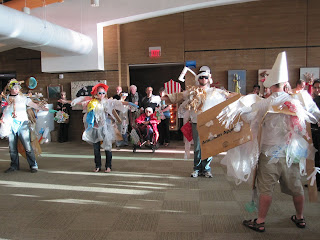